Through the book “The true diary of a part time Indian” Arnold makes big changes to make him progress in his education and by doing this is he gets exposed to two different cultures. For Arnold to be a part time Indian means he is a kid that lives at the reservation but goes to reardan high school and has distinct identities depending where he is.

In the book he refers to himself a lot in many different ways being part Indian. But why does he refer to himself being a part time Indian?
Well to start we need to analyze the part of him that is Indian. On the reservation his identity in the way he sees himself is a poor reservation kid with little, to no future. An example of this is on page 7 where he says.” I wish I were magical, but I am really just a poor-ass reservation kid living with his poor-ass family on the poor-ass Spokane Indian Reservation. In the book he also wrote on page 61-62 the “unofficial and unwritten rules” they had on the reservation where ultimately everything they did that they disliked ended up in violence. This is all very important because ultimately this is how he was raised and will always be a part of him wherever he goes, including when he went to rearden.

Now let’s focus on his rearden side of his identity. When he chose to go to rearden he knew there would be challenges and he would have to push through them. At rearden he used violence to get him out of the situation where he was getting teased. Once he finally got the hang of being there he started to change the way he dressed and looked and began to start “unofficially dating” a girl named Penelope. On page 126 Arnold said he forgot his wallet and Roger covered him with fourth dollars. This is all important because it shows where he was going with his life and with a different type of people than what he grew up with his entire life.

In conclusion Arnold in this book struggles to find a balance between both identities in his life and finds it in the end after everything he experienced and learned through his challenges.


Connections Paragraph: I found some connections when we went to the Native American museum in Ignacio on how they lived. I noticed that they had a lot of similarities on how they never left their land and also celebrated their powwow ceremonies. I do not know when this book is taken place but I found that many of these traditions are still very much alive and a lot of this information I read connected to the book in a sense on their culture and how a lot of them go to different schools like Arnold did and how their schools were recently funded to get updated with better supplies and equipment to help with education.

This year for humanities I feel like I am meeting expectations is perseverance by getting my work done and staying on task when it comes to class work! For example when we were working on our genocide posters I feel like I was on task and didn’t get off task. Another expectation I feel like I’m meeting is turning in my work on time because an example is all of my assignments except 1 that I have turned in on time this year!
One expectation that I feel I am not meeting as well is doing my best on all of my work. An example of this is on my hero’s journey poster because I feel like I could’ve done better and made it look nicer. I feel like I can get better at this by spending more time out of class to work on my posters and work!
I believe the most important thing I have learned in the last 7 weeks is hero’s journey cycle because everything we are learning in this semester connects to hero’s journey. I also found it very interesting  because I have never really noticed it in movies and books and even in real life. 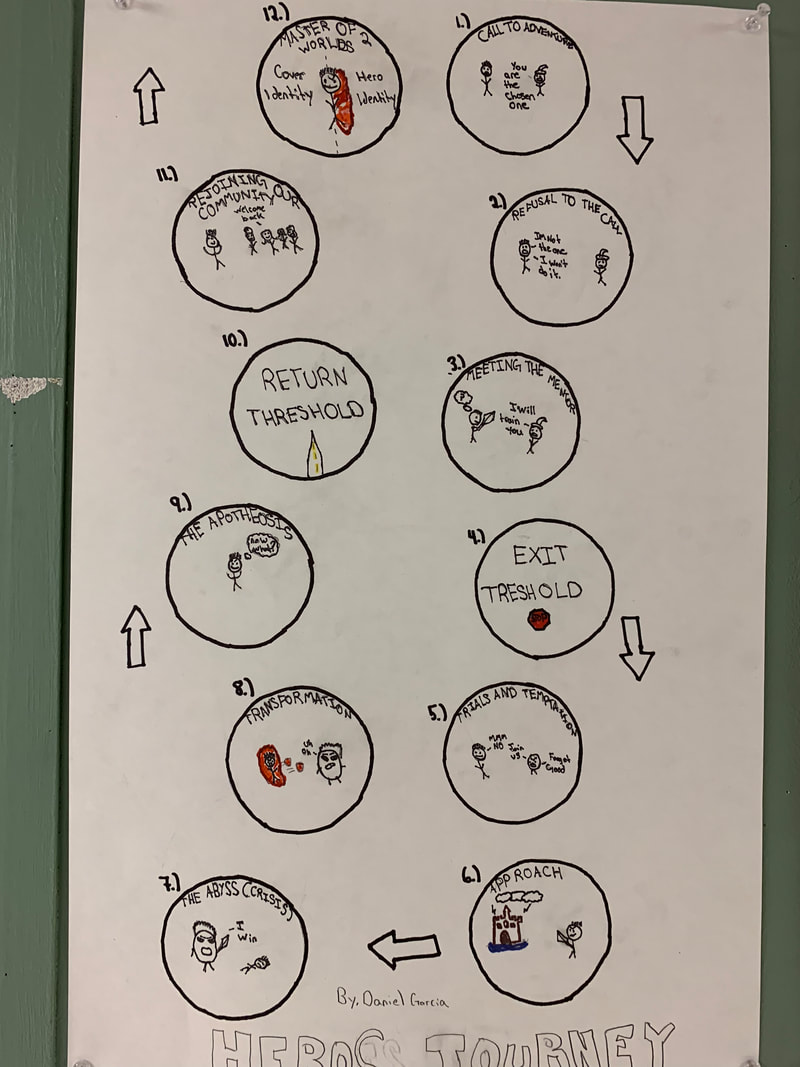